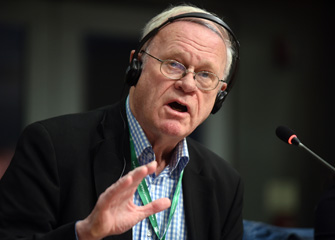 Wouter Veening started his environmental work at the Dutch Ministry of the Environment in the 1970s as policy advisor and speech writer. In 1984 he became director of IUCN Netherlands, where he focused on the impact of the Dutch economy (second in agricultural exports in the world, after the United States) on the important ecosystems around the world, such as the tropical rainforests, and where he participated in the international advocacy to green the portfolios of international finance institutions such as the World bank, the IMF, the European Commission and the Regional Development Banks.

From 1990 -1994 he was co-chair of the International Working Group on Environment and Trade to help ensure adequate attention to environmental matters within the World Trade Organisation.

A special topic of interest became the wider Amazon region, also in its relation to the Caribbean, as a mainstay of global ecological stability.

In 2002 he co-founded the Institute for Environmental Security with its headquarters in The Hague, as International City for Peace, Justice and Security, and as Legal Capital of the World. The international outreach to the military concerned about the security implications of on-going climate change and environmental degradation and the application of international criminal law in the field of intentional damage to the environment are among the major areas of work for the institute, which he still serves as Chairman and President.

All sessions by Wouter Veening